Still having a really great time in Shanghai! I love the people of China. The ministry with the young adults has gone very well. Taught Tuesday evening on “God is Not Embarrassed by Sex” (young adults showed up for that one!) explaining that as good Christians our hang up with sex is more about the body itself, than sex per se. Taught how we as Christians are not allowed such views on the body…as Lewis said, “No sense in trying to be more holy than God.” First, look at creation. God created male and female in His image – naked and not ashamed – with very distinct and lovely bodies. Sorry, that’s how the story goes. And it is in the Fall that Adam and Eve cover themselves in absolute shame from one another and from God.

Second, look at the incarnation. God becomes man in flesh.

Jesus, the God/man, is placed into the body of Mary in a seemingly scandalously  intimate way, was He not? And He was born an un-swaddled, male child. He was circumcised. He lived a very regular day-in, day-out human life for 30 years before starting His ministry. He goes to the cross bodily. He is resurrected bodily. He proves himself alive after death to Thomas and others….bodily. He ascends back to the Father in Heaven, bodily as the first fruits of those who will be raised after death, bodily (which is every single one of us…if you believe certain hip-pop preachers today).  We are commanded by our LORD to remember His life and death by taking his body and blood into ourselves at the divine table of communion. Can we overstate how important the body is to the Christian believer?

Third, being made in the image of God, we as male and female are made for love and unity. And as humans with bodies, God’s first command to this new man and woman is to engage one another bodily in the most intimate of human embraces. It is right there in Gen 1:28. And that engagement is full-frontal, if you will. But also deeply emotional as well as spiritual. The human sexual embrace is intended by God to be a full-human embrace, encompassing our full God-created and God-blessed humanity. That is exactly how we receive it from God. And it is through this bodily, emotional and spiritual union that male and female become life-giving. Like God is also life-giving – fecund. Same, but different. We human, He divine. So that was my teaching on Tuesday. I LOVE teaching the Scriptures and am reminded this week what a terrible honor and responsibility is! And He chooses to allow us to participate with Him in that task. Very humbling, considering what God saved – and is saving – me from.

Here is what I did to goof-off.

Went to dinner last night with the assist 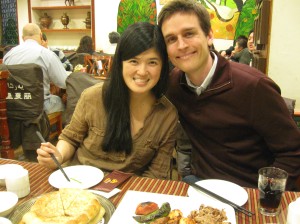 ant pastor of the church hosting me and his lovely wife Cindy. She works for Gap here in Shanghai. They took me to an amazing place near their apartment that is a particular type of authentic Chinese cuisine, but looks like its more middle-eastern. Very good. Here, they just order lots of different plates of food – like P.F. Changs, but not – and everyone eats off all the plates as they wish. Plenty, plenty of food! I will be SUMO-like when I get back.

Last night at 11pm, David kindly put me in a cab across from his apartment to send me back to my hotel (the Marriott), said something in Mandarin to the cab driver and off we went. We pulled up to the Sheraton 20 minutes later and the cab driver proudly motions “Here we are!”

I’ll have to tease David that telling the driver “Please take my friend to the big American hotel!” is not adequate! 🙂 His wife was just telling me before I left that the cab drivers here are not the sharpest knives. I finally made it home. Had a really wonderful night.