Rosie the Riveter: Not the Feminist Icon You Think She Is 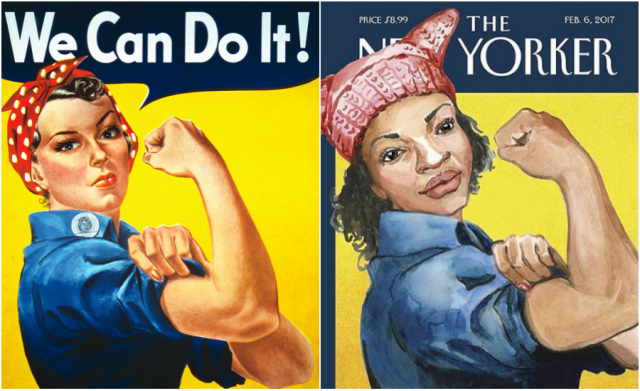 She’s become one of the world’s most well-known icons.

The rolled up sleeves of her heavy denim work shirt. Her slender arm flexed, fist clenched in an unmistakable “don’t mess with me” pose. Her factory employee button alongside her finely manicured nails. Her hair bundled up in her trademark bandanna, crowning her very pretty and meticulously made up face. She’s at once hard, strong, beautiful and unmistakably feminine.

But she’s not who you think she is. Not at all. And the New Yorker’s historically incorrect use of the poster and misappropriation of the woman herself is an insult to women’s history.  Let me tell you her story.

She was created in 1942 by artist J. Howard Miller who produced her under contract for Westinghouse. It was one of a series of posters, each used as motivational tools for Westinghouse employees to boost team spirit, factory productivity, and safety and also avoid strikes. The directions to shop managers to “Post Feb. 15 to Feb. 28” appear in its bottom left corner. Thus it was seen for only two weeks, exclusively by Westinghouse employees of its Midwest operations. It was unknown to the public until the mid-1980s.

She is not actually Rosie the Riveter. Westinghouse didn’t rivet anything. The Rosie that people knew and loved at the time was Norman Rockwell’s “Rosie the Riveter.” (Note her halo, her curious “man arms” and the title of the book she is crushing beneath her foot.) She was even feted in this snappy and popular tune.

The “We” in “We Can Do It!” is not a collective, feminist “we.” “We” was the corporation’s male and female employees. The “It” was meeting the order quotas for each factory, each day. Her flexed arm and clenched fist? It was certainly not a revolutionary symbol of strength and feminist empowerment. It was part of Westinghouse’s daily corporate cheer to stoke morale. Westinghouse Magazine (September 1942) featured a picture of such a rally with the explanation, “With ‘Let’s Show Them’ as their slogan and a clenched fist as their symbol,” the team readies for their duties.

Rosie has been grossly misappropriated. She was no feminist, to be sure!

She was only so in that she expected full and equal pay for a full day’s work. But she was first and foremost a dedicated patriot, standing in while her husbands and boyfriends were on the Front. Her desire was to earn a living for her family and help her men come home safe and soon. Nobody, even the most traditionalist of her day, thought she was transcending or redefining femininity by doing this sort of labor.

Yes, she was happy for the work, the education and independence it provided. She changed the working world for her daughters and granddaughters, to be sure. But the only message she was interested in sending was to the Axis powers. Her only stand was for victory. She was indeed strong, capable, and dedicated and did not shrink from the difficult challenge. The millions of women who became Rosies were true national treasures, and the Great War likely could not have been won without them. Her British sisters did the same, as did her mother and grandmother in WWI.

Just as Elizabeth Cady Stanton and Susan B. Anthony would be scandalized to find themselves assumed into a movement that is antithetical to their strongly held convictions about the life of the unborn and virtue of motherhood, Rosie would be as well. A scholarly article in the journal Rhetoric and Public Affairs addresses the many myths and misconceptions that have grown up around the “We Can Do It!” poster in recent decades. The authors designate its pop-culture evolution a “feminist fable.”

Today’s understanding of the poster and its message are for the most part “mythic” …[W]hile the words in “We Can Do It!” may appear to emerge from a female source, the image’s beauty and elegance conceal the fact that it is a ventriloquist’s voice commissioned by Westinghouse, a voice whose purpose was evidently [corporately] masculine and perhaps even exploitive.

That poster was replaced on the factory floor by this one of the same series by the same artist, just the opposite of any feminist ideal. These scholars conclude the “poster has come to represent a past that never was.” Most of these patriotic and self-sacrificing Rosies would not care for the way they have been coopted by the more radical fringes of the feminist movement today, particularly the New Yorker’s historically dishonest use of her. This is who she was, here, here, here, and here.

She signed up for and succeeded in a great national cause. It’s incorrect to sign her up for something she was never about. She was not a revolutionary idealist, but a patriotic realist; head down, working hard for her family and country.

Rosie was a well-behaved woman who made history. Let her be what she was.

2 Responses to Rosie the Riveter: Not the Feminist Icon You Think She Is