Glenn’s New Book – The Church is NOT Shrinking! 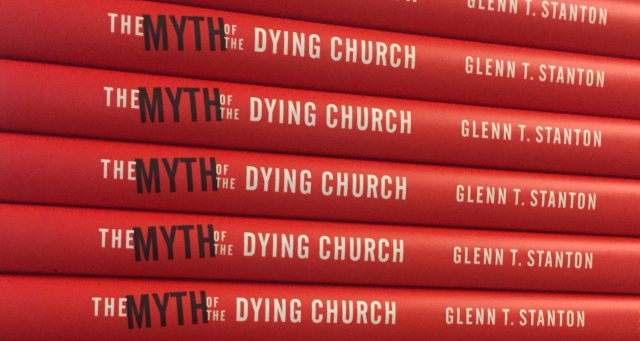 Are people leaving the Church in droves?

Is Christianity shrinking in the United States and around the world?

Most people believe they are because they’ve heard this news time and again from the mainline press and countless Christian leaders.

The truth is it’s not true.

In this new book, The Myth of the Dying Church, I carefully demonstrate just how untrue this is. I do so, not by drawing from a study here or a survey there, but from looking at the large and impressive work of the leading sociologists of religion. Their findings are actually quite encouraging.

Liberal churches are hemorrhaging members. Churches that are bailing on Christian orthodoxy—those denying the deity of Christ; rejecting the reality of sin; doubting the historical reality of Christ’s death and resurrection; and embracing abortion, gay, and gender politics—are all in a drastic free fall. People are leaving those churches as though the buildings were on fire. They can’t get out fast enough.

Biblical churches are holding strong, even growing. Churches that are faithfully preaching, teaching, and practicing biblical truths and conservative theology are holding stable overall. Some are seeing steady growth and others are exploding. No small number are pressed thin with the good problem of figuring out how to manage their growing crowds. You likely know of a few in your own community; perhaps you even attend one of these churches.

Church attendance is at an all-time high. More Americans, in raw numbers and as a percentage of the population, attend church today than at any other time in our nation’s history, including the colonial days. That’s hardly scary news.

More young adults attend biblically faithful churches today than attended nearly fifty years ago. According to some of the best sociological data, the percentage of young adults regularly attending evangelical and nondenominational churches has roughly doubled between 1972 and today.

Atheism and agnosticism are not growing wildly. Both have grown in the last few years, but they are an extreme minority, counting for just about 7 percent of all US adults.

The Nones are not new unbelievers. The infamous “nones”—those reporting to have no particular institutional faith—are indeed a growing category. This has been widely reported. But there is something very important to note here: they are not a new category. They are not folks who have left a once living faith but rather are those who merely had a cold or lukewarm family history of church identity and now feel more comfortable saying, “I don’t really identify with anything.” It’s not a change in belief. Instead, it’s an honest explanation for where they’ve always been.

Global growth of Christianity is booming. The number of Christians in the world today is larger than it has ever been in the history of the world and will continue to increase through the coming decades. The story here is incredibly positive. Scholars studying this phenomenon use words like explosive and mushrooming to describe Christianity’s global growth, particularly in China and Southern Asia, Africa, and South America.

Passing on Faith to Our Children is Not a Crap Shoot. Christian parents who want to build a lifelong faith in their children only need to do a few important things. Doing so is not rocket science or a secret formula that must be applied just Your chances of success are remarkably high.

The Myth is Based on Bad Theology.  It’s the Holy Spirit who runs and drives Christ’s church across time and throughout the nations. He is unstoppable, unquenchable and inherently life-giving. He is not nodding off, sickly, or on vacation. The work of His heart and very character will not be thwarted. He is God. To believe the church is dying is deny these truths and judge God either confused or a liar.

These things describe the true state of the Christian faith in America and around the world as recorded by leading sociologists of religion who employ an array of different means to study the phenomenon and who have no particular commitment or interest in reaching any specific finding. They are simply looking at the numbers as honestly as they can and reporting their findings.

The Myth of the Dying Church tells the story of these findings—examining important details, uncovering critical nuances, and explaining how conclusions are reached—and what it all means for the future of Jesus’s church and its life-giving mission in the world.

Order six copies each for all your friends, family, co-workers and neighbors. They will love you for it, so will I and my publisher really will.

2 Responses to Glenn’s New Book – The Church is NOT Shrinking!